Founded in 2006, the vegetarian restaurant breaks away from the usual boring vegetarian items with vegan proteins emboldened with tasty marinades and sauces. The concept is rooted in creating yummy menu items that consumers can feel good about eating: food that is good for your health and good for the planet.

“Once we discovered how delicious veggie proteins could be when they were prepared with the right marinades and sauces, and how you could create classic American sandwiches and burgers that were as good as the real thing but without cholesterol or animal fat, we were hooked,” co-founder T.K. Pillan said.

Plates that top the popularity list include the Santa Fe Crispy Chickin' (“people can't believe it's not real chicken”) and the All Hail Kale (“many people tell us they are addicted to it. It really makes you feel great”). The “Sweetheart Fries,” made from sweet potatoes, are some of the best around. The best part, according to Pillan, is “seeing the looks on people's faces when they try our food and are amazed that it is vegetarian.”

“After we discovered how delicious veggie proteins could be when prepared properly, we started doing research on the benefits of vegetarian diets. We tried it ourselves, lost weight, felt great, and really developed a passion for creating our restaurant concept,” said the founder.

Salads are made with quinoa, a supergrain. Meat substitutes include veggie steak and chillin’ chickin’, both seasoned and marinated proteins that mimic animal meats. The menu includes salads, such as The Chop-Chop Chef and the Thai Chickin’; several sandwiches, including the All-American Stack and Chipotle BBQ; a daily chili and daily soup, such as Corn Chowder and Louisiana Gumbo; a few desserts, including Carrot Cake and Chocolate Chip Cookies; and more.

Kid’s menu items are available and the restaurant sells wine and beer. Veggie Grill boasts restaurants in eight locations, seven in Southern California and one in Portland. Pillan’s goal is to expand along the West Coast and then launch a national effort. 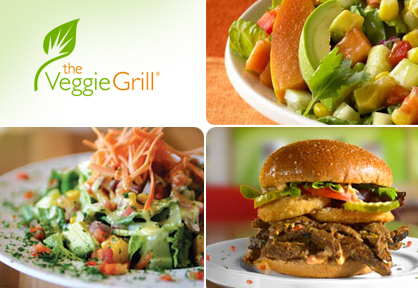